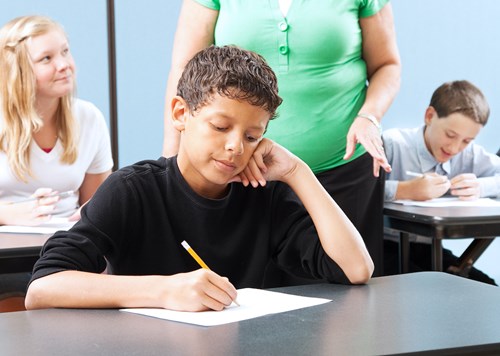 There’s growing sentiment across the country among educators that the standardized testing system in the U.S. is deeply flawed. Those making this argument say the system as currently practiced rewards schools for sliding students through testing, does not match any specific curriculum and does a poor job of measuring students’ analytical capabilities.

Rather than focusing on helping children succeed, many believe standardized testing has led some schools to focus on improving test results because they are directly tied to funding.

Among educators across the country, the issue of the validity of testing is not much of a debate. Stephen Sawchuk, an associate editor at Ed Week, wrote, “Ask anyone from a school accountability expert to a parent of a school-age child, and you will get near-universal agreement that we have a dysfunctional standardized-testing system in the United States.”

A Brief History of Federal Involvement in Education

Since the founding of the United States, federal officials have understood education as critical to a well-functioning republic. Even before Congress ratified the U.S. Constitution, laws like the 178 Land Ordinance and the 1787 Northwest Ordinance included the provision of education as a responsibility for the nation. Through the 18th and 19th centuries, the federal government supported state education systems through land grants and, on occasion, federal funding.

Examples of federal support in the first half of the 20th century include financial support for the original land-grant system of colleges and the GI Bill of 1944 that eventually helped pay for the education of about 8 million World War II veterans.

The federal role in education greatly expanded in the 1960s. In 1965, President Lyndon B. Johnson won passage through Congress of the Elementary and Secondary Education Act (ESEA). Johnson’s administration designed the ESEA, a key part of the “War on Poverty,” to close the achievement gap between students in well-funded and impoverished schools.

The act focused on equal access to education and authorized the use of federal funds in areas such as teaching materials, professional development for educators and promoting parental involvement. Over the years, Congress has amended the act, with the two most significant changes coming in the 21st century.

The No Child Left Behind Act of 2001, under President George W. Bush, introduced standardized testing to promote standards-based learning. And in 2015, President Barack Obama won passage of the Every Student Succeeds Act (ESSA) that reauthorized the ESEA while also turning decision-making authority on many issues back to the states.

However, the ESSA did little to change the reliance on standardized testing.

A report on standardized testing by the Pennsylvania State Education Association (PSEA) points out that ESSA ensured federal testing requirements would continue. They note that “concern has been growing among parents, educators, students, policymakers, and others about time spent administering student assessments.” Many call for fewer, more innovative tests that more accurately assess a student’s abilities in areas such as math.

None of this has had a lasting, positive impact on student scores, which have fallen below the global average. And as Sawchuk points out, “Our nearly 20-year experiment with yearly federally required exams has boosted math scores, research indicates, but those gains have petered out as accountability pressures have grown more acute.”

Other standardized testing cons involve how states tie funding for school districts to test scores. Schools lose funding if they do not achieve high enough scores, which creates a flawed system where schools are caught teaching to tests. There have even been schools teaching students how to cheat on tests.

The PSEA is calling for Pennsylvania to use the power given to states by the ESSA to lower the number of tests. They advocate annual testing in grades 3-8 and one test in high school.

Even as educators and politicians debate these issues at the state and federal levels, teachers can learn to better reinforce essential areas of a child’s education through professional development courses. Courses such as Helping Children Succeed and Math Activities: Primary Grades offered by Fresno Pacific University can help educators better prepare students for academic success no matter how the pollical debate over standardized testing plays out.