A History Lesson for Teachers: Inventions 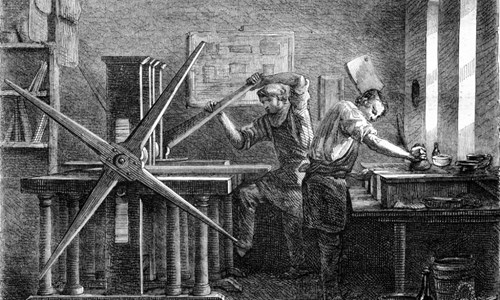 One of the most interesting subjects that educators can teach is history. It’s a subject that provides a chance to analyze how people dealt with the challenges of the past as well as provide context for the present. Many history students discover recurring patterns that they may not notice if they only consider current events.

One of the most illuminating topics in history involves inventions that changed the world. From the early humans who learned how to control fire a million years ago to the invention of the integrated circuit in the 1950s, discoveries and advances in technology have guided the developmental arc of civilization.

For both teachers and students, learning about history and inventions that changed the world should be both informative and fun. Fresno Pacific University’s Inventions That Changed the World course gives teachers a chance to learn best practices for making the past come alive for students. It’s part of the popular Great Courses series offered through Fresno Pacific.

Inventions That Changed the World

Politics, royalty and privileged people with the wealth to influence both tend to dominate the pages of history books. While the actions of many of these people are open to debate, certain historical events had a clear-cut impact that changed the course of entire civilizations. They include advances in philosophy, mathematics, medicine, engineering and art. They also include world-changing inventions such as the following.

No discussion about inventions is complete with acknowledging the early humans who tamed fire. The latest evidence now points to this happening about one million years ago, according to findings at South Africa’s Wonderwerk Cave. Stone tools date back even further. The oldest examples come from the shores of Lake Turkana in Kenya, dating back 3.3 million years. They are so old that they pre-date the emergence of the earliest humans from the Homo genus.

People today take pictures with their smartphones to text them to someone on the other side of the world. Louis-Jacques-Mandé Daguerre and Nicéphore Niépce, who invented the daguerreotype in the 1830s, needed eight hours of exposure to make a photo (they eventually shortened it to about 30 minutes). However, their invention changed how people saw the world, and also gave millions their first look at places far from where they lived (like this 1837 photo by Daguerre and Niépce of their studio).

The modern world is built with steel, and the ability to mass-produce steel is only possible due to the creation of the Bessemer Furnace. Two people invented the process in the 1840s—Sir Henry Bessemer in England and William Kelly in the United States. Modern steel plants use a more advanced process, but those innovations stand on the shoulders of the two men who invented the Bessemer furnace.

Printing started in China in the first millennium A.D. A Buddhist book from Dunhuang, The Diamond Sutra, is credited as the oldest known printed book (from about 868 A.D.), However, Johannes Gutenberg, working in Germany around 1440, greatly advanced the process with his printing press. The inventions led to the mass distribution of information and made books easier to produce and more affordable.

On Dec 17, 1903, the Wright brothers (Orville and Wilbur, taking turns as pilots on four trial flights) demonstrated that an airplane could fly under the control of a pilot. Those test flights took place near the Big Kill Devil Hill in North Carolina, about six miles outside of the town of Kitty Hawk. Their invention revolutionized travel and freight transport, opening up trade between far-flung locations.

That’s just a sample from a long list of life-changing inventions. Others include:

The video-based courses help teachers develop practices that allow them to better engage their students on various topics. In the case of Inventions That Changed the World, educators learn the story behind a wide variety of inventions, how they work and how they reflect—and in some cases define—cultural values.

The course takes a global perspective, from Ancient China to Silicon Valley. Teachers learn to differentiate between discovery and invention and develop a deeper understanding of common inventions used in everyday life.

Assignments in the course address the National Board for Professional Teaching Standards (NBPTS) for Science inventions. Completing this course is applicable towards earning the STEM Teaching Certificate from Fresno Pacific University.